My little girl turned six years old this month! She is over the princess stage so I had to figure out how to throw her a Super Mario birthday party on a budget. I wanted to share what we did so you can throw one for your Mario fan, too! 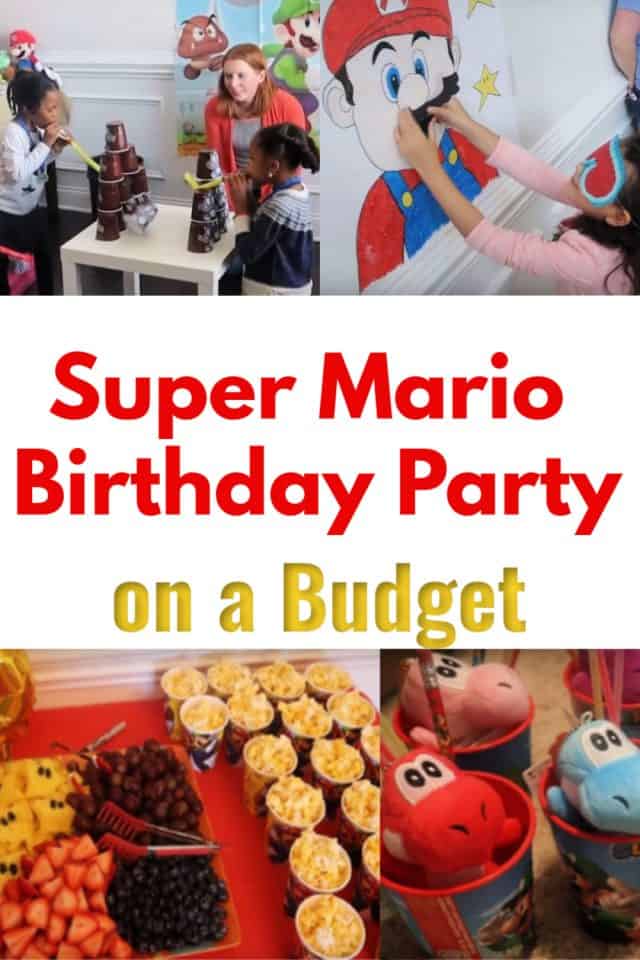 We spent a little under $250 for the entire party which isn’t bad considering it would have cost us over $450 to throw a party at an inflatable bounce house place. That didn’t even include food!!

We had the party at our house which saved a lot of money! If you have a community clubhouse, you may want to see if you can rent it for free. Our previous neighborhood did that and just required a deposit. If you didn’t ruin anything in the clubhouse, you got the deposit back.

We had about 10 kids at my daughter’s party and everyone had so much fun! I enjoyed making all of the games and food for the party. And seeing this smile on her face made everything worth it! 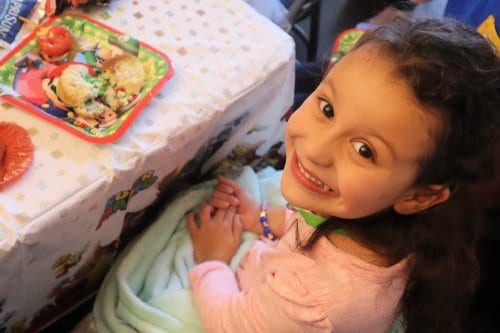 Post contains affiliate links. If you make a purchase, I will earn a commission at no extra cost to you.

How to Throw a Super Mario Birthday Party on a Budget

Most of the money that we spent was on decorations. I bought most of our decorations at Party City when they were having their Black Friday deals. I also shopped through Rakuten to get cash back on my purchases.

If you want to save even more money you can always just buy some plain red paper plates and cups from the dollar tree. They also have some basic party decorations if you are more crafty than I am.

We did buy a helium tank from Target to blow up all of the balloons.

To make things easier on myself, I just bought a big party pack from Party City that was for about 24 people. It included all of the table covers, centerpieces, birthday banners, photo backdrop, pinata, tableware, and more!

We also bought some Mario balloons that came separate.

It was cheaper to buy everything in the party pack instead of purchasing things individually. The kids loved the photo backdrop and photo props that came with it. 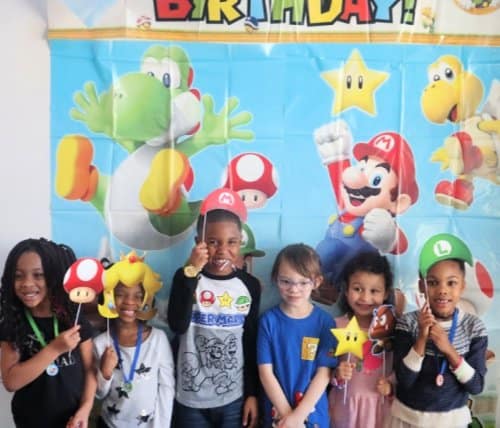 As people started arriving, we let them all take pictures as we waited for all the guests to get there.

To save money on food, we had the party at 2:00 pm instead of having it at 1 or earlier. This way we didn’t have to buy pizza or sandwiches since people would have eaten lunch before the party. All we had to do was supply snacks and drinks.

We had some bottled water and juice boxes for everyone to drink.

As far as the food, I had 2 different kinds of chips. I also popped some popcorn and put them in the Super Mario cups that came in the party pack that I had bought.

I also put together a fruit platter with pineapple, grapes, strawberries, and blueberries. It was a lot cheaper to buy the fruit individually and cut it up myself compared to buying a fruit bowl at the grocery store. All of the fruit I purchased cost around $10 compared to the fruit bowl which was over $30!

I cut the pineapple with a star cookie cutter and made the eyes with some black decorating icing. They turned out really cute! 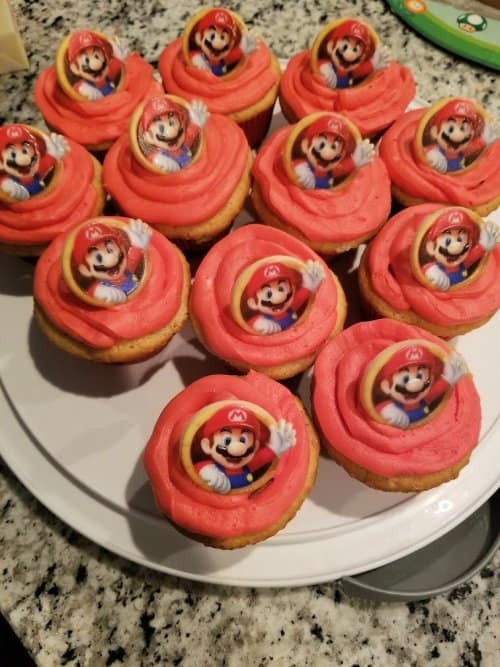 I also saved money by making the cupcakes myself instead of buying them. I found these really cute cupcake topper rings to go on each one and the kids could take them home at the end of the party.

To really throw a Super Mario Birthday Party on a budget, I had to get creative with the games. Since her birthday is in the winter, we had to do everything indoors. We had the Pinata that came in the party pack, but everything else was a DIY game or activity.

Pin the Mustache on Mario 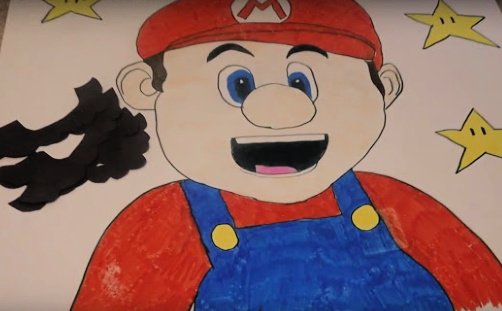 I got a poster board at The Dollar Tree for 50 cents and drew Mario on it without his mustache. Then I cut some mustaches out of black construction paper. We used the blindfold that came with the pinata. This game only cost around $1 to make and the kids loved it! 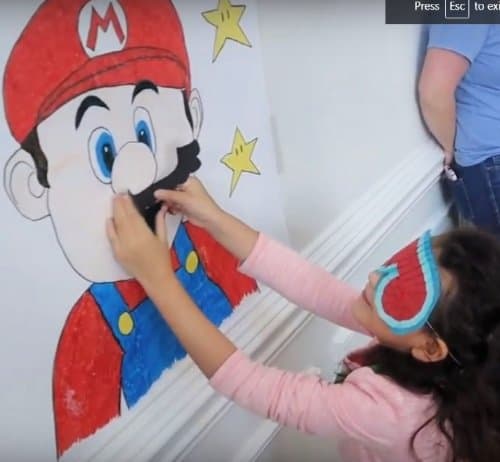 My daughter got a stuffed Mario and Yoshi for Christmas so we used those to play the next game. I took a 5 gallon bucket that we had in the garage and just spray painted it green. 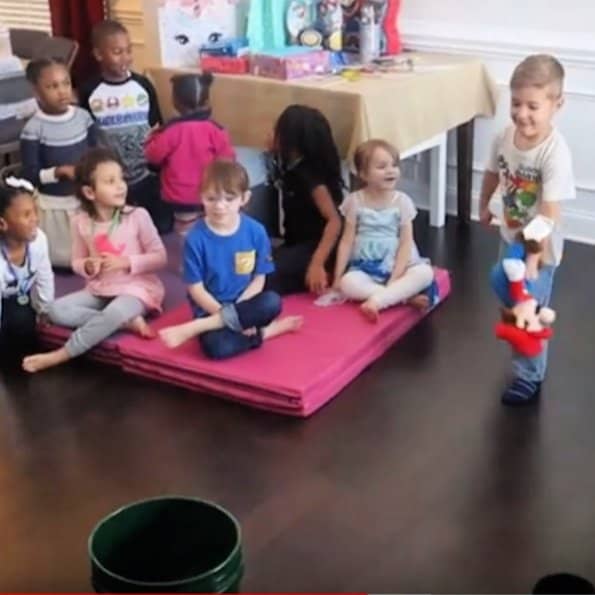 The kids took turns throwing Mario and Yoshi in the “pipe drain” and when they got both in, they won a Mario medal.

Knock Down the Goombas 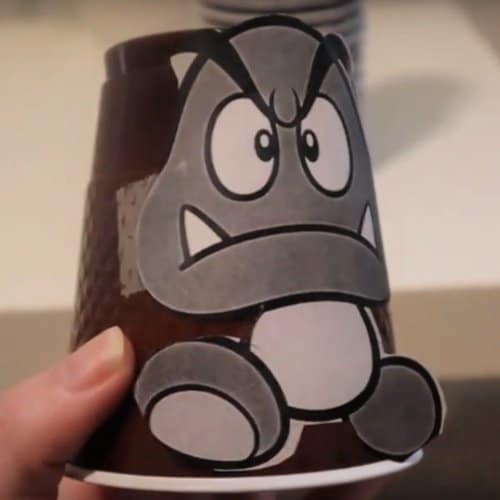 For the next game, I printed out 20 images of a Goomba that I found online and just taped them around brown plastic cups.

I also had bought some Super Mario Bros. party blowers that the kids could use as Yoshi’s tongue. They then used their blowers to knock down the pyramid of Goombas. We made it a race to make it even more fun! 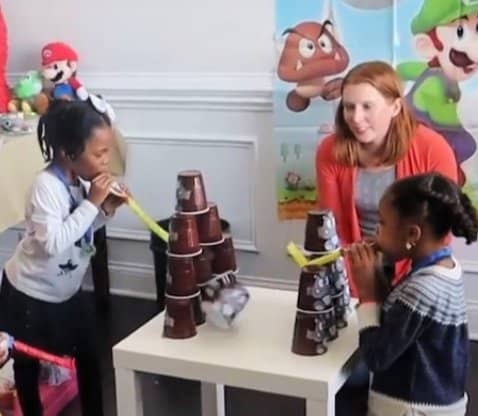 This was the most popular game at the party! We had to do it three times, the kids loved it so much. I just took some Easter eggs that we had in storage and applied some white circle stickers to make them look like Yoshi eggs. 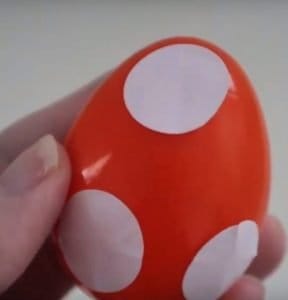 I then hid them around the living room and the kitchen and everyone could find one egg and take it back to the party room.

I hid little squishies in each egg so the kids could open their eggs to find a surprise. You can always just use candy but the kids LOVED finding the squishies.

I hate wasting money on those cheap plastic party favors that kids usually throw away after 5 minutes. I wanted to get them something fun that would last longer than a day. 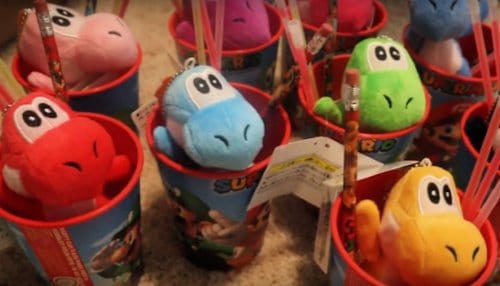 Instead of goody bags, we had goody cups. I bought some Super Mario favor cups that the kids could use at home.

I also put in some Super Mario pencils that they could use at school.

I also found some bouncy balls at Walmart in the party favor section. They were 97 cents for a pack of 6. I had some leftover glow bracelets from Halloween that I used as well. I got these at the Dollar tree.

The highlight of the goody cups were the mini plush Yoshis. The kids LOVED them! I found a pack of 10 on Amazon and they come in different colors so the kids know exactly which one is theirs. They have a little chain at the top so the kids can put them on their backpacks.

My daughter said three of her friends had them on their backpacks the next day!