Home » Parenting » Baby » First Picture with Santa: How to Prepare your Baby or Toddler

My favorite part about Christmas as a kid was going to see Santa every year. Some kids love this or hate this. I was so excited to take my daughter to get her first picture with Santa two years ago.

She was almost one when we took her to get her picture with Santa and we got some great shots and she loves to look back at these pictures every year, as do I! 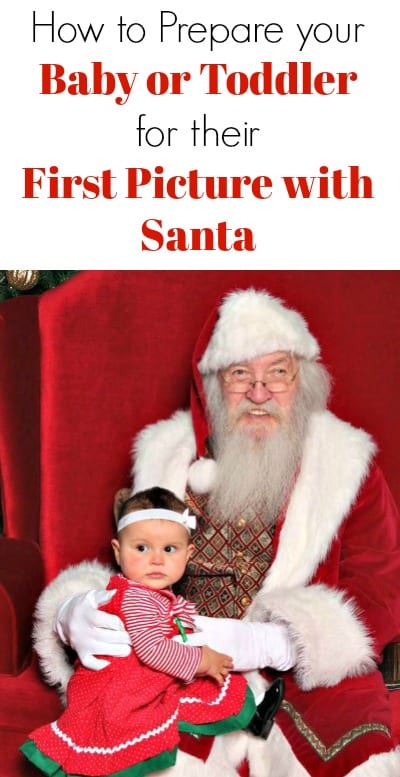 She was a very shy baby and had separation anxiety so I knew getting a good picture was not going to be easy. I used a few tricks to help make her more comfortable that I wanted to share.

Maybe they can help you prepare your little one for their first or even second visit to Santa this coming holiday season.

You really can’t blame kids for not wanting to sit in a stranger’s lap, so if they still seem uncomfortable, maybe try again next year. Hopefully some of these tips will help, though.

5 Ways to Keep your Christmas Tree Fresh All Season

It helps if your baby or toddler is already a little familiar with Santa. I let my little girl watch some non-animated Christmas movies so that she would be used to seeing someone who looked like him.

I suggest non-animated movies because they need to get used to seeing a real person, not the cartoon version.

Some of my favorites are: Miracle on 34th Street and The Santa Clause.

Visit the Mall a Few Times

One of the things I did was to take my daughter by the Santa photo set up at the mall a few times before we were ready to get her photo made.

I was there to do some shopping anyway, so each time we would stop by and watch some of the other kids get their photos made.

She could see how nice Santa was and how the kids were excited to see him. She even waved to him a couple of times so I knew she was getting used to seeing Santa. 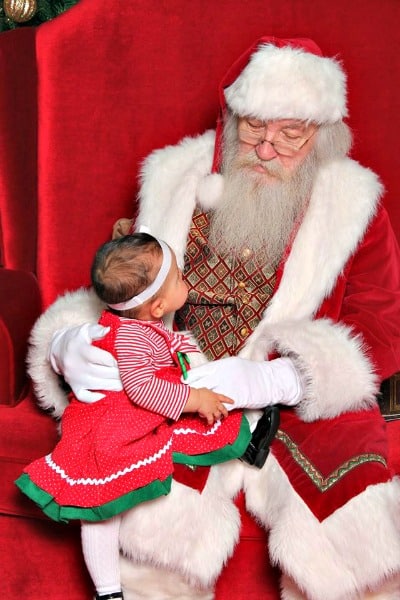 Go in the Mornings

If it is at all possible, go when it isn’t busy. We went on a weekday morning and there wasn’t anyone in line. Plus, she had plenty of rest and wasn’t cranky.

Don’t go when it is almost nap time, that is just asking for trouble!

Since we went when it wasn’t very busy, we were able to take our time and let her see Santa, the photographers, and the whole set up before we even got close to Santa.

Let the photographers know if this is your child’s first photo with Santa, they are used to working with babies and kids they will know different things to try and that they should take the photo quickly.

Also, let them know if your child is afraid of loud sounds or has anxiety. They will sometimes try to get their attention with bells but my daughter was not a fan of that, it made her upset.

We didn’t know that she had anxiety like we do now, so just keep that in mind.

Let them see you go up and talk to Santa. This may help calm any fears that they have if they see that Santa is Mommy or Daddy’s friend. 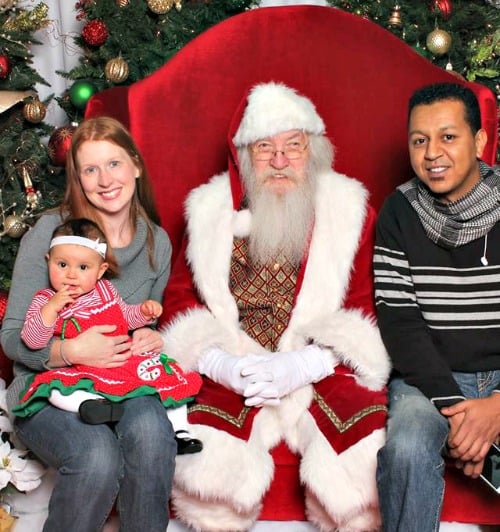 Get in the Picture

My daughter had separation anxiety so she did not want to go straight from my arms to Santa.

My fiance and I sat on either side of Santa with my daughter in my lap and it made her a lot more comfortable to be around him.

After we took a few photos, which I think turned out really cute, I slowly slid her onto Santa’s knee and backed out of the picture while she was looking at him.

The photographers were quick and we got some great photos of just the two of them. 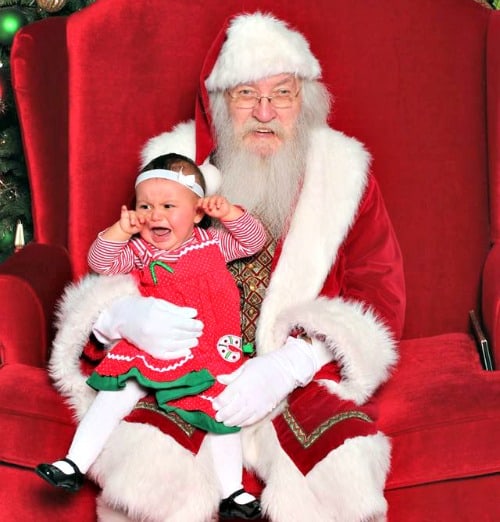 It’s probably going to happen; your child starts crying. They might still be scared or just have had enough, but it’s OK if the picture isn’t perfect.

I think that some of the crying pictures make for great memories and everyone seems to have one at some point or another.

It’s fun to pull them out when the kids get a little bit older.

My daughter is still a little timid around Santa now that she is three years old but she still wants to see him this year. I told her that she doesn’t have to sit in his lap, she can just stand beside him if that makes her more comfortable.

That seems to help and she is getting her list ready for this year’s visit with Santa. 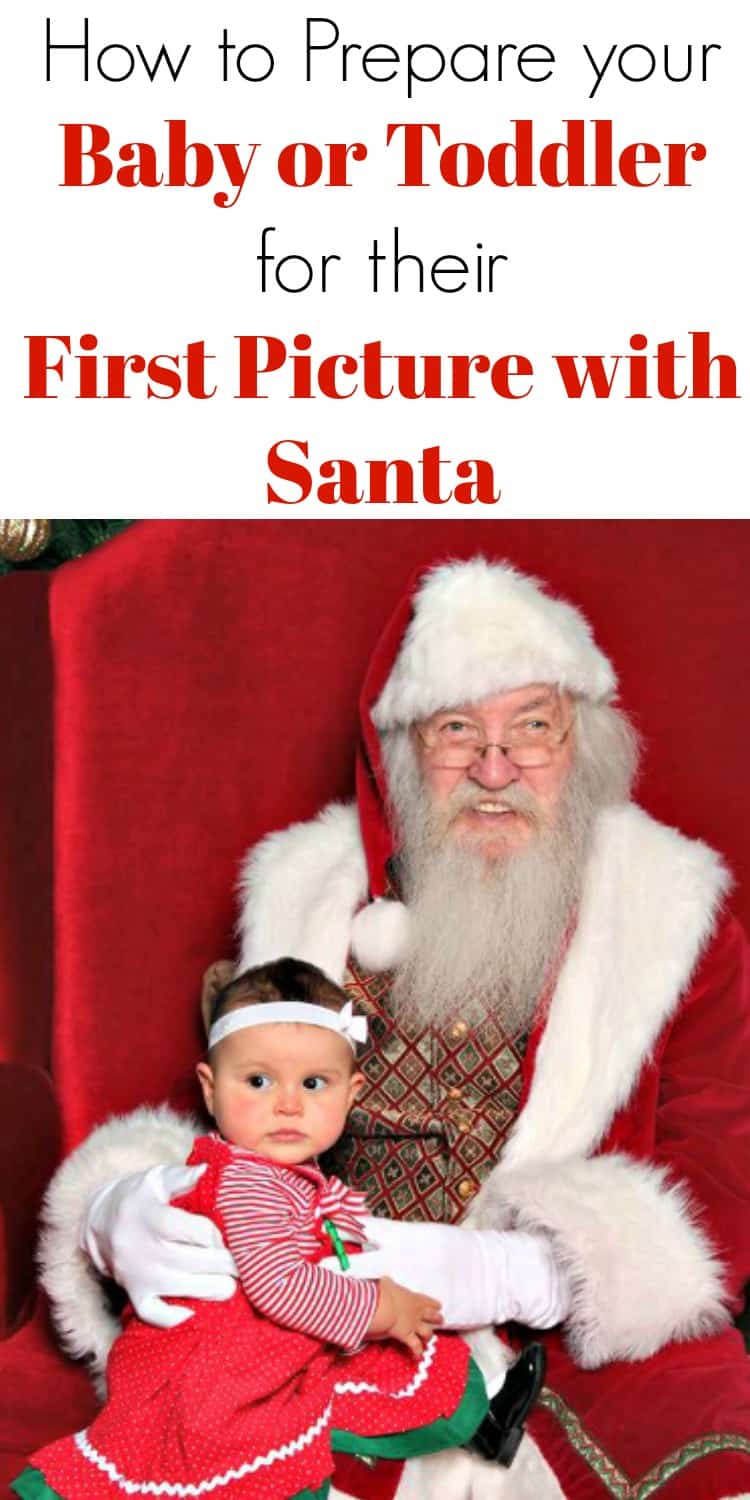