“This review was made possible by Double Duty Divas and Cascade. I was provided the featured product free of charge to facilitate my review, but all opinions are 100% mine.”

I hosted my second party for the Cascade Platinum Shining Reviews and it was a blast! You can read about my first Cascade Platinum Party to see how that one went. This time instead of hosting a late lunch, I did a brunch. It was delicious. I had a few friends and in-laws over to show them how the new Cascade Platinum worked in the dishwasher without any pre-washing. 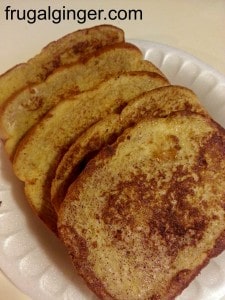 First, the menu. I made some yummy french toast and egg and cheese crescents.The food was easy to make but it did leave a big mess behind. I let all the dishes sit so everyone could see how they looked before. I thought this would be interesting to see if it really is the Cascade Platinum working or just the dishwasher. My first party was held at my Mom’s house and she has a much better and newer dishwasher then I do so we will see how my dishes come out compared to the ones at her house. 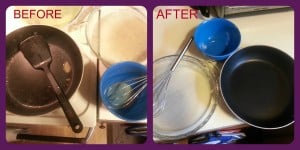 As you can see from the picture above, the dishes came out sparkling clean even without pre-washing and soaking. There weren’t even any spots left on the pie pan! So even with my old dishwasher, the dishes came out great! Cascade and Marie Claire actually took a survey of people’s dishwashing habits and found that nearly half (46%) of survey respondents believe that skipping the pre-wash will lead to dirtier dishes. When in reality, breaking this habit – and skipping pre-wash – along with using Cascade Platinum, will help them achieve the ultimate clean and sparkle every time.

Other key findings from the study reveal that 89-percent of those surveyed did not realize that most dishwashers feature a garbage disposal, which safely disposes of any remaining food soil on the dishes. And, of all the people wasting their time pre-washing, three-quarters (74%) are experiencing daily fails with dishes that come out looking dirty, spotted or streaked after running them in the dishwasher, with nearly half of respondents (51%) re-washing their dirty dishes a second time.

After hosting the two parties I am very impressed with Cascade Platinum and so were my guests. I will be using this from now on because I really can tell a difference when I use Cascade Platinum instead of my normal dish washing detergent. You can try Cascade Platinum for free by printing a rebate at Cascade.com. Try it and let them know what you think by leaving a review on their site with #cascadeshiningreviews! Here is to cleaner dishes and less time getting them. 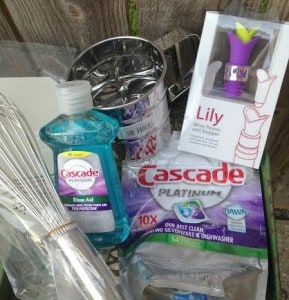 I am hosting a giveaway for a Cascade Prize Pack that will include:

This is open to US residents only. Just fill out the form below. Good luck!
a Rafflecopter giveaway