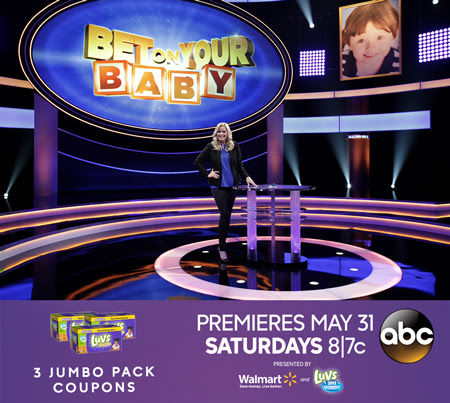 Have you heard of the show Bet On Your Baby that airs on ABC? Bet on Your Baby is back for its second season May 31st at 8pm ET/7pm CT. All parents think they know their baby well, but are they willing to bet on it? Find out when actress/comedienne and working mom Melissa Peterman, star of ABC Family’s Baby Daddy and Reba hosts this adorable, hilarious and surprisingly suspenseful game show. Parents try to predict their toddler’s next move in an effort to win money for their child’s future education.

This sounds like a fun show and I can only imagine how my baby would do. At 5 months she obviously isn’t ready to participate in a show like that but her little personality is starting to show and she is a little ham. I think she would do great on the show, as long as she was in a good mood :). I love that the prize is money for the kids’ education.

Check out these images to get you ready for the show:

The show airs Saturdays at 8pm ET/7pm CT on ABC starting May 31st. Thanks to Bet On Your Baby one of my readers will win a pack of 3 Luvs coupons for a Jumbo pack of diapers. Just fill out the form below. Each household is only eligible to win One (1) Pack of Three Luv’s Coupons via blog reviews and giveaways. Only one entrant per mailing address per giveaway. If you have won the same prize on another blog, you will not be eligible to win it again. Winner is subject to eligibility verification. Open to US residents only.